Every big city is going to have something in the way of a “natural history” museum. Chicago is no exception; the Field Museum is located smack in the middle of a park on the lake shore, on the wrong side of the Lake Shore Drive. Which makes it a bit inconvenient to get to, if you can’t figure out the bus routes and forget that you have a transit pass….and approach it from the side where the entrance happens to be closed that day….

But if you can pass – or at least bulldoze your way through – that intelligence test, the museum is well worth it.

I came in at the Ground Level, which is the charitable term for “Basement”. There’s not much in the way of exhibits; it’s mostly a couple of snacking areas and a theater. But one of the exhibits, the “Underground Adventure”, was rather cool. You are “magically” shrunk down to 1/100 of your normal size, so you can see what it looks like just under the surface of the soil at an ant-level perspective. A fun and neat way to show off all the amazing stuff that happens just under our feet.

Up on the main level, the entry hall is dominated by “Maximo the Titanosaur”, the fossil skeleton of one of the largest land animals ever to walk the earth. Well, it’s actually cobbled together from a couple of titanosaur fossils that were found in the same place; I doubt anyone will argue the point that much. Speaking of dinosaurs, the Field is also the home of “Sue”, the largest and most complete Tyrannosaurus rex fossil skeleton found to date. “Sue” has her own gallery! Technically “Specimen FMNH PR 2081”, “Sue” is named after Sue Hendrickson, the fossil’s discoverer.

I know the big dinosaurs get all the press, but I’ll take some trilobites in all their variations:

Which one is your favorite?

A Dunkleosteus (the terror of the Devonian seas):

Or something truly weird like the Tully Monster any day…. 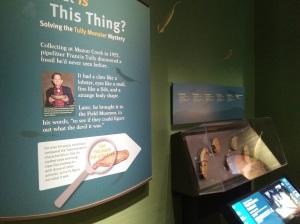 Best shot I could get…

It’s not just animals and plants (it’s really cool that the world of plants gets substantial gallery space – it’s only fair, after all), a heck of a lot of space is given over to what can be best described as “Anthropology”. One large collection was on Africa. I breezed through it; I’d certainly have given it more attention if I had more time. What I did note, with no small amount of pleasure, was that they focused on the actual kingdoms and societies that existed (and still do) on the continent, without whining about colonialism or slavery. If you really want to respect those peoples and nations, treat them as such – with their own histories and cultures and traditions, and not as merely the victims of European powers. Another good exhibit tracked the development of civilization in the Americas – from the first tribes that walked across to the empires of the Aztecs and Incas. What made it different was that it was organized thematically rather than historically. How did they go from tribes of hunter-gatherers to villages to cities to kingdoms to empires? What effects did the environment have on their choices and resulting culture? Cool stuff!!

There was one special exhibit that I had to see, even if it took an extra admission fee – and not just because it was being advertised on huge banners all over the city. “Wild Color” was a look at how plants and animals create and use color. I think the whole concept of “color” is infinitely fascinating. From the physics and chemistry of how it is created, the neuroscience of how it is perceived, the psychological and cultural associations, the history and even the linguistics behind it…. Organized by color from red to purple (naturally), they even included black, white, and ultraviolet!

But I do have one gripe about the exhibit. This is a major attraction; can’t you whip up informational panels with a bit more durability?

Seriously, people, this is Not A Good Look.

By this time, my brain was starting to seize up from information overload. I went to the bus stop in front of the main entrance (there were plenty of signs telling me where it was), and was soon back at my hotel figuring out dinner.

This entry was posted in Uncategorized and tagged Chicago, travel. Bookmark the permalink.