If you’re like me (and I know I am), you get tired of the same old holiday songs being played on the radio by the second week of December – if not sooner. Fortunately, there is a radio station that doesn’t play by the rules. WFMU (91.1 FM) broadcasts from northern New Jersey, and is what is known as a “freeform” station. The DJs play whatever they want, subject only to FCC regulations. All but the tiniest fraction of their income is from listener donations, so they are beholden to no one. Think of it as a college radio station – but without the basketball games.

Around ten years ago, they started archiving their shows on their website – so you can listen in regardless of the constraints of time or space.

Most of their DJs have holiday specials of some sort – tune in over the next week to hear what they’ve come up with. Here are last year’s (mostly) holiday shows from my favorite programs for your “streaming” pleasure. You are definitely going to hear things you’ve never heard before. The descriptions are the DJ’s own….

END_OF_DOCUMENT_TOKEN_TO_BE_REPLACED

Let me be honest. I’m getting tired of digging through and dredging up all the Christmas music out there. I’ve already shared the holiday tunes I thought were worthwhile, and had to dig around near the bottom of the proverbial barrel to fill up the last holiday mix (or two).

So the heck with it. This year, I’m just going to go through my collection, and without curating or even ordering the choices, just toss out every single version of “Jingle Bells” I have.

Take it or leave it. END_OF_DOCUMENT_TOKEN_TO_BE_REPLACED

Made for the Christmas 1968 episode of the ‘children’s’ show Do Not Adjust Your Set.

Gilliam had moved to London in 1967, and was working as art director for London Life when his friend John Cleese (whom he had worked with in the US) introduced him to Humphrey Barclay, who was producing Do Not Adjust Your Set, which was written by and starred Michael Palin, Terry Jones, and Eric Idle. Barclay happened to be an amateur cartoonist, and loved what Gilliam was doing with his cut-out stop-motion animations. He pretty much forced the trio to include Gilliam’s works.

For the Christmas special, Do Not Adjust Your Stocking, Gilliam went to London’s Tate Gallery, and poked through their huge collection of Victorian era Christmas cards. He made copies, and just started playing around with them. “So the style just developed out of that rather than any planning being involved,” he would write in the Python’s ‘autobiography’. “I never analysed the stuff, I just did it the quickest, easiest way. And I could use images I really loved.”

Jonti Picking is at it again! I only wish I had found it earlier. But anyway, it doesn’t matter what order you watch them in. And there are a few more to go!

Well, here I go again. Another hour-plus of holiday music, both new and old, that you’re probably not familiar with. With this one, I’ve pretty much taken care of all the songs I originally felt like including way back in 2013. I can’t think of anything else that absolutely must be included. So if I post one again next year, I might just reissue that first mix.

Anyway, the track list and link are below the jump.

By the way, I think I’ve managed to balance the sound levels properly this time. Found a freeware music editor that lets you “normalize” sound files in a “batch process”.

END_OF_DOCUMENT_TOKEN_TO_BE_REPLACED

For some reason, this doesn’t come up on the lists of “Best Holiday Commercials”, though the knock-off one by Budweiser with their Clydesdales does. It’s got great simplicity, great visuals, great music, and it isn’t trying to sell you anything. It’s just a one-minute long Christmas card from the Miller Brewing Co. to everyone:

I don’t watch much TV these days, so I haven’t really noticed what’s current in holiday TV ads. But there’s one sort that really gets my goat – those car ads where the husband buys a new car for his wife. The ones where the car has the big ribbon and bow on it.

I know that we shouldn’t expect TV World to be an accurate reflection of reality – but who does this? Who buys a luxury car for someone as a Christmas present? Yeah, there are people who a so stinking rich that they could if they wanted to, but those aren’t the people shown in the ads.

The couples/families in the ads look to be upper middle class. The sorts of people that would not be making a major purchase – like a luxury car – without full knowledge and consultation of everyone. I can picture the wife, when the cameras stop rolling, saying, “Wait a minute. How much did you spend on this? And where did you get that kind of money? What about the monthly payments? Who’s paying the insurance on it? What made you think I would want to have this exact car?” And then snowballs (because it’s always a snowy scene in these ads) and worse being thrown about in anger.

Then there’s the subtle sexism in the ads. You never see a *wife* buying the car, do you. A lot of TV ads have what could be called “reverse sexism” in them. The husband/man tends to be shown as stupid, sloppy, forgetful, and incompetent – the wife/woman is the one who somehow fixes everything. It doesn’t tick me off that much; I figure it’s a sort of payback for all the sexism against women over the decades (or centuries). If you don’t believe that this exists, next time you see a TV ad with a husband and wife, imagine it with the roles reversed….

Anyway, enjoy your holidays. And may you get something that’s actually practical and useful – and doesn’t require any extra payments on your part.

Since I was in Manhattan recently, with time to kill, I took the opportunity to stroll up Fifth Avenue and check out the big holiday displays – Lord & Taylor, Saks, Tiffany, Bergdorf Goodman.

L&T had their usual fantasy scenes. I couldn’t get close enough to Saks to see what was in their windows, but they did have their big light and sound show on the facade.

Pro Tip: The best way to see the Rockefeller Center tree? Come at it from Sixth Ave, or one of the side streets. It is practically impossible to approach it from Fifth Avenue, because that’s where the mob of humanity is forced into tight passageways. Approach the tree from another direction, and you can get right up to it!

While I have no problems with any of the displays, I do have some ideas for things I’d like to see…

END_OF_DOCUMENT_TOKEN_TO_BE_REPLACED

I’ve kind of fallen into the common trap with these collections. You gather all your favorites, and find you have too many for one collection. So you pick a few to go in Volume 1, and then add a few that didn’t quite make the cut to the batch for next year. And then the next year, you find you’ve got only a few “favorites”, so you do your best to pad out the collection to make something worth putting together and sharing. Then, you realize you somehow forgot a few, but four or five songs do not really make a “mix tape”, so you pad it out with general stuff that you hope people like…

Well, there it is. I’ve got a few more (three or four) that I could toss out next year. Kind of like stocking stuffers when compared to the big gifts. Or I could just repost the first Mix from 2014. We’ll see what I feel like next November, when I start thinking about this.

END_OF_DOCUMENT_TOKEN_TO_BE_REPLACED

So we put up the office Christmas decorations this week, and there were a couple that really got me peeved.

I suppose they were intended to represent snowflakes, but they were like no snowflake that ever existed on this planet. Instead of the natural hexagonal symmetry (six sides), they had octagonal symmetry (eight sides) – eight branches coming off the center in a squarish pattern.

Here’s a photo of an honest to goodness real snowflake:

A real snowflake! The way nature intends them to be!

See that? SIX SIDES! Here are more photos of the types of actual snowflakes, in all their amazing variety:

The one thing they have in common? SIX SIDES.

Here’s a photo of the sort of thing that got put up around the office: 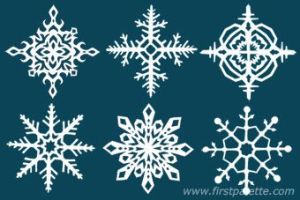 I suppose the reason these abominations exist is because people are too lazy to bother learning the trick to making the necessary hexagonal fold.

But come on, it’s not that hard. And there are plenty of “How To” websites, like this one:

If you prefer watching a video:

I actually use that method for the hexagonal fold, but I’ve never ironed them. Instead, I pause when I’ve made that dart shape and before I begin cutting. I unfold the paper, smooth out all the creases, and then fold it back up.

Pro Tips: The thinner the paper, the easier it is to fold and cut. Use sharp scissors! Also, always make straight line cuts. No curves! Real snowflakes do NOT have curves!

If you make a mistake cutting them, or they don’t look good, don’t worry. It’s just paper! Toss the defective ones in the Recycling Bin (White Paper Only), and make another.

So do it right and make your own individual unique snowflakes, OK?

It’s probably the most unusual version of “Deck the Halls” you will hear.

La Senza is a Canadian-based lingerie company. Back in 2010, they wanted to make it known that they had garments in the larger, hard-to-find sizes. Their ad agency noticed that there was a correlation between cup sizes and musical notes….

The campaign – a video and website – was launched in the beginning of December, 2010. The website not only linked to the store so you could purchase the featured items, but had an interactive app where you could “play” and even record your own tune.

The video is below the jump; it’s a lingerie ad (YouTube has it as “age restricted”), so it’s probably Not Really Safe For Work.

Unless you work someplace sexy.

In which case, can I send you my resume?

END_OF_DOCUMENT_TOKEN_TO_BE_REPLACED

This work by https://pureblather.com/ is licensed under a Creative Commons Attribution-ShareAlike 4.0 International License