Way back when I was first starting this blog, one of my posts was an essay about birdwatching from my living room window. I still live in the same place, and although the apartment complex management cut down some of the trees (the ones just outside the window, naturally) and installed some new LED floodlights for the parking area (which are SO BRIGHT I need an eyemask to sleep), there are still plenty of birds to see.

I’ve been using a lot of my “free time” when I’m technically “working from home” to stroll around the neighborhood and hike at the local nature sanctuaries. I’m getting better at spotting and identifying the birds. It’s nice to spot a bird of a species you’ve never seen before – and frustrating to try and identify it when you’re not carrying a guide with you, and the birds aren’t going to sit still and pose for you anyway.

Some birds, thankfully, are so easy to identify. Like the Red-Winged Blackbird, where the only way you could improve on the name as a description would be to call them Red-Shouldered Blackbirds. I don’t know of any bird that is “blacker”. They are as black as black can be, sucking all the light into their dark little souls….. They aren’t dark gray (like crows), mottled black (starlings) or shiny black (cowbirds). They are BLACK. And their call is distinctive, too. A raspy buzz that no other bird comes close to.

I haven’t seen any Red-Winged Blackbirds around my home – they prefer lakes and wetlands, and there aren’t any in my neighborhood. I did have a Good Sighting Day recently. A Wood Thrush, Scarlet Tanager, Black and White Warbler, Yellow-Rumped Warbler, Bay-Breasted Warbler, and what I believe was a Cerulean Warbler all visited the trees outside the living room on the same day*. It took me a while to ID the Bay-Breasted Warbler, thanks to Guide Failure. I was careful, and took notes. “Brown back, white breast, like a thrush. Similar in size and shape, too. Rust-red top of the head, and band across the breast and under the wings of the same color. Bars on the wings that look like it stole the idea from a Mallard.” So I go looking in an online searchable guide for a brown, thrush-like bird, and scan the images for what I saw. Nothing. I had to get really creative and expand my search terms before I found it. 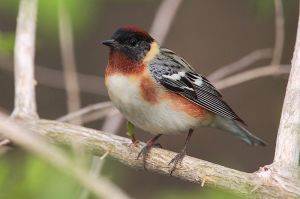 A bit of luck to see one, they just pass through my part of the country as they migrate between summer and winter territories.

I also get to birdwatch from my bedroom window – my desk faces it; I’m looking out the window as I type this. The fire escape just outside is a nice perch for the many house sparrows that nest in the vents, and I can see crows hanging out on the roof of the next building, and chimney swifts flitting about in the sky. An unusual visitor stopped by the other day – a Red-Tailed Hawk. It was a juvenile; the tail was mottled rather than the rust-red that give the bird its name. I wasn’t too confused; I’ve seen Red Tails before (a friend who went through all the bureaucratic hoops to become a Falconer had an “arrangement” (you do NOT make them pets!) with one, and I got to see it at fairly close range) flying around the area. This one, though, decided to hang out on the next building’s fire escape for a few minutes! Perhaps it was looking for chipmunks to nosh on – those things are everywhere.

Right now, we’re heading into the height of summer. Migrations are over, so it will be robins, blue jays, and catbirds for the most part until fall. I’ll keep my eyes open and my fingers crossed.

*NOT a ‘record’, there was a day back in 2015 where I spotted a Least Flycatcher, Golden-Crowned Kinglet, Yellow-Rumped Warbler, Black-Throated Blue Warbler, Tufted Titmouse, Black-Throated Green Warbler, and a Yellow Warbler – all within about half an hour!

This entry was posted in Uncategorized. Bookmark the permalink.

One thought on “More Birdwatching Notes”