It’s not your usual “get me to the church on time”. A team of demon fighters is racing through the streets, hot on the trail of….something unseen that is tearing up the pavement as it goes. Even a bunch of kids playing in the street isn’t going to stop them. Fortunately for the kids, the team has “portal guns” that open a sort of tunnel / gate that lets them pass through the space where the kids are playing.

You will note two things right off the bat.

Whatever it is ripping up the streets doesn’t bother taking shortcuts through / across lawns or even sidewalks. And the kids make no move at all to get out of the street when they hear something coming.

Well, at least they set the tone right away. And they got the stupidest bits taken care of at the start.

Anyway, they arrive too late to the wedding in the park to stop the Thing from attacking the wedding party and killing the groom. It almost kills the bride, but it turns out that she’s prepared. Thanks to a concealed blade (that looks like it would have cut her leg quite a bit as she walked around), she is able to fight and kill the Thing.

Turns out she – Summer Vale (Brigitte Kinglsey) – is a “warrior princess” whose mission is to kill demons who sneak over into our realm. And there’s been a surge in demonic activity lately. Can she and her team find out the reason behind it – and save the world?

Also known as Dark Rising: Summer Strikes Back, this is the second movie in a franchise of television movies and series. The product of husband and wife team Andrew Cymek and Kingsley, it’s a bit large for a mere vanity project. And if this movie is any indication, they went in to the project with the intention of making something that wasn’t all about satisfying their egos.

I freely admit I decided to watch this because I’m shallow. Promise me a curvy woman with long dark hair, and you will have my attention. What surprised me was that I watched it all the way through. It was actually entertaining.

Yes, it was made on a TV budget. The agency’s HQ was obviously a school. You could see the “edges” on quite a few of the larger CGI effects. The cast wasn’t anything special. The action sequences and fights needed a little help with the choreography.

But the story never called for any really exciting locations. The special effects got the job done. The cast was competent enough for the demands of the script; even the comic relief was acceptable. As far as the fight sequences are concerned, the editing generally compensated for any weaknesses. And when Kinglsey is kicking butt in her underwear…..

Speaking of Kingsley’s underwear, I am going to get up on my soapbox now and issue an Official Complaint about something that has been infecting movies for well over a decade.

And that is the overuse of the Teal and Orange color combination.

I get it – they are contrasting colors that look good. You use Teal or Cyan to indicate coolness. Twilight, winter, a chilly impersonal environment. And Orange is the color of a warm, cozy fire. And explosions.

But COME ON, there are plenty of other colors you can use as well!

Here’s a scene from X-Men: Apocalypse:

I can accept that you want to highlight the actress’ gloriously red-orange hair. But check out the background. EVERYTHING is cyan or orange. Have you EVER been in a city where the buildings are all one or two colors like that?

Speaking of everything being one color, here’s a shot in the main control room in Godzilla: King of the Monsters. I can’t tell if everyone is wearing cyan clothing, because ALL THE LIGHTING is that color. First of all, who works in an office that dark? How can you read any documents? What if you drop something? And why are all the displays one color? It’s a terrible way to display data.

How about TRON: Legacy? Almost all of the movie took place in an artificial environment inside a computer. You have all the colors you could ever want to paint the environment. What did they go with?

For much of “Classic” Doctor Who, the TARDIS Control Room was white. This allowed you to focus on the actors, who were the most important things in the scene. 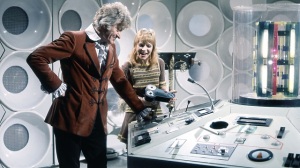 Here’s the most recent incarnation of the Control Room: 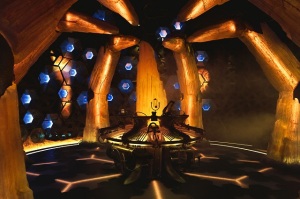 Anyway, I bring this all up because so much of Agency of Vengeance: Dark Rising falls into the same old Teal and Orange Pit of Agony. Here’s Kingsley taking up a position to do battle with a baddie who has invaded her apartment:

USE OTHER COLORS, PEOPLE!

When you expand your palette, you expand the opportunities to use colors in a symbolic manner. There’s a whole theory behind the use of colors in superhero costumes, for example.

When I watched Scaramouche (1952) (more than just a reference in “Bohemian Rhapsody”) in all its glorious Technicolor, I noted a bit of color coding in the gorgeous costumes. Nobility and royalty tended to wear pastels – ivory, lavender, sky blue – while commoners wore earth tones. Not dull browns and grays, but vivid colors – maroon, burgundy, forest green, chestnut brown. 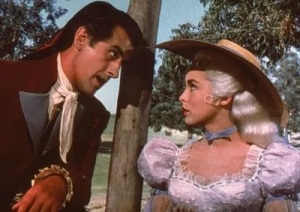 These days, you’ll almost never find such vibrancy outside of an animated film, and that’s a damned shame.

OK, back to AoV:DR. I honestly wasn’t expecting much from a movie I’d never heard of. But, so help me Mr. Lobo, I watched the movie, the whole movie, and nothing but the movie – and it was a pleasant way to spend some time.

This entry was posted in Reviews and tagged Movie Review, Science Fiction. Bookmark the permalink.