One clear symptom of “Olympic Fever” is when the media starts producing lists of “Greatest Olympic Athletes” or “Top Olympic Moments”. One thing that should be obvious is the lack of respect given to the Winter Olympics.  While it is true that the Summer Games have around three times the number of events as the Winter Games, they’ve been around almost as long and have produced quite a number of great moments and great athletes.

Sadly, the lists of “Great Winter Olympic Moments” that I’ve seen are filled with jingoism (as if there were no athletes from outside the United States ever), and seem to consider controversies as “great moments”. Right…. Judging scandals and bribery are things we want to celebrate.

Let’s just leave it to the athletes – regardless of what countries they come from. Because every Winter Olympics has seen something worth celebrating.

1924: Chamonix, France – Sonja Henie wins the hearts of everyone in the Women’s Figure Skating competition. Since she was only eleven years old, it wasn’t surprising that she came in last. When returned in 1928, she had been the World Champion for a year – and won the gold. She did it again in 1932, and, still World Champion, won the Olympic gold one last time in 1936.

1940: cancelled because of World War II

1944: cancelled because of World War II

1948: St. Moritz, Switzerland – On his way to winning the gold for men’s figure skating, Dick Button becomes the first person to land a double axel jump in competition. With alpine skiing appearing for the first time in the Winter Olympics, Henri Oreiller, the “Madman of Downhill”, wins medals (2 gold and 1 bronze) in the three events. And despite having retired and not competed in several years, Birger Ruud participates in the ski jump event and adds a silver medal to his golds (from 1932 and 1936).

1960: Squaw Valley, United States – After officials ask to see a tape of the men’s slalom to determine if a skier had missed a gate; CBS gets the idea for Instant Replay. In what was called the “Miracle on Ice”, the US Hockey team wins the gold over heavily favored Canadian and Soviet teams. Cross country skier Veikko Hakulinen comes from way behind in the 4 x 10 km relay to get his team the gold, giving him a lifetime total of three golds, three silvers, and a bronze.

1968: Grenoble, France – First color broadcast of the Olympics and the first use of “Bugler’s Dream” by Leo Arnaud as the TV theme. Peggy Fleming blows everyone away and wins the gold in women’s figure skating. Jean-Claude Killy wins alpine skiing’s “triple crown” by collecting gold medals in the downhill, slalom, and giant slalom.

1976: Innsbruck, Austria – Franz Klammer throws caution to the wind and flies down the slopes to take the gold in the men’s downhill. Dorothy Hamill shows off a new move and a new hairstyle while taking the gold in women’s figure skating. John Curry wins the gold with the highest point total in the history of men’s figure skating. Rosi Mittermaier had never won an alpine skiing race – then she earns two golds and a silver medal in the three events.

1980: Lake Placid, United States – Thomas Wassberg edges Juha Mieto in the 15 km cross-country skiing by 0.01 seconds, the closest margin of victory ever in Olympic cross-country skiing. Irina Rodnina and Alexander Zaitsev cap their amazing career in pairs figure skating by taking their second Olympic gold. Eric Heiden wins five gold medals in speed skating. Hanni Wenzel wins two golds and a silver in alpine skiing; her brother Andreas takes home a silver. Together they completely demolish the “medals per capita” curve: they are from Liechtenstein (population: 35,000). After winning an incredible 13 World Cup races in the 1978-1979 season, Ingemar Stenmark wins two golds in alpine skiing. He’d finish his career with an awesome 86 wins (32 more than the next most winner).

Jayne Torvill and Christopher Dean win the gold by doing this:

1988: Calgary, Canada – Katarina Witt defended her Olympic title in figure skating. Alberto Tomba made the most of his Olympic debut, winning both the giant slalom and the slalom. Yvonne van Gennip wins three speed skating gold medals, setting two world records and one Olympic record in the process. Ski jumper Matti Nykänen dominated both individual events, winning both by huge margins. This made him the first ski jumper to win two gold medals at the same Games and brought his career total to four gold medals and one silver medal. 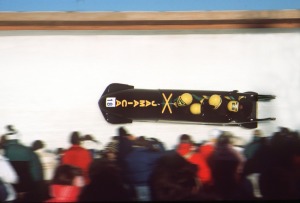 1998: Nagano, Japan – Björn Dählie wins three gold medals in Nordic skiing to become the first athlete to earn eight career Winter Olympic gold medals and 12 medals in all. Hermann Maier took a spectacular fall in the downhill, flying off the slope at 120km/h and remaining air-bound for more than 3.5 seconds. He courageously recovered to earn gold medals in both the super-G and the giant slalom.

2002: Salt Lake City, United States – By taking the silver medal in singles luge, Georg Hackl became the first person in Olympic history to earn a medal in the same individual event five times in a row. Biathlete Ole Einar Bjørndalen wins gold in all four men’s events. Speed skater Steven Bradbury, a competitor who had won a bronze in 1994 as part of a relay team but well off the pace of the medal favourites, cruised off the pace in his semifinal only to see three of his competitors crash into each other, allowing him to finish second and go through to the final. Bradbury was again well off the pace, but lightning struck again and all four other competitors crashed out in the final turn, leaving a jubilant Bradbury to take the most unlikely of gold medals, the first for Australia—or any other country of the Southern Hemisphere—in the Olympic Winter Games.

2010: Vancouver, Canada – Marit Bjørgen wins three golds, one silver, and one bronze in women’s speed skating. Simon Ammann repeats his performance at the Salt Lake City games by winning a pair of golds in ski jumping

This entry was posted in Uncategorized and tagged Olympics. Bookmark the permalink.