Well, now that I’m arrived and settled in, it’s time to check out the sights.

It’s always good to get out of the city and visit the countryside (such as it may be). The Netherlands is (Are?) one of the more densely populated countries in the world, so there isn’t really that much “countryside” to speak of. And what there is, is flat and damp.

However, there’s still a good deal of “countryside” to see.

I booked a tour at Experience Waterland (through Trip Advisor) to see the windmills of Zaanse Schans, a “cheese farm” and wooden shoe maker, and the villages of Volendam and Broek in Waterland. It was a small group tour, and turned out to be even smaller when half of the people who signed up for it didn’t show. Their loss.

Roos (pronounces “Rose”), our guide and driver, was delightful, charming, and informative. At each stop, she gave us enough time to wander about on our own.

The weather, as it was for most of my time there, was mostly cloudy with scattered showers. Fortunately the rain held off while we were outside, but it still meant that Zaanse Schans was not seen at its best. The place felt a little “touristy” anyway. The windmills were moved to the area from their original locations across the country. They are being operated and maintained by dedicated “windmill buffs”, which is cool. The mills are all dedicated to a particular purpose – grain, sawing wood, etc. One of them was used to grind paint pigments. Apparently, that one is old enough so that it is just possible for Rembrandt to have gotten supplies there. It’s not likely, true, but it’s nice to think that on one day he went to his local supplier and…”What do you mean you’re out of burnt sienna? How can you be out of it? It’s one of the most widely used colors! I’ve got a huge commission that I’m working on! Where do you expect me to get it??”

The deal with wooden shoes:

You’re a farmer who raises cattle (which is pretty much the only thing the land is good for, agriculturally). You live and work in low, wet ground. You could buy solid leather work boots, but they’d be ruined in just a few months by the working conditions. And you can’t afford to keep buying a new pair three or four times a year.

Poplar, a light and easy to carve wood, is cheap and readily available. You can paint, carve, and otherwise decorate it to your heart’s content. And it cleans up just by pouring water over it….

Makes sense, now that you think of it. They’re sort of a combination of Crocs and work boots. 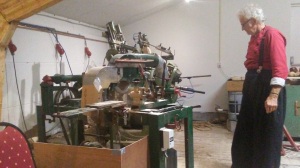 Volendam, a small fishing town, had the distinction of being the last Catholic town in the Protestant Netherlands. You can tell, because the churches have crosses on the top (Protestant ones have roosters, for some reason). It’s also known for the twisty little passages, all different, between the houses that gives one neighborhood the name of “The Maze”.

Broek in Waterland is another neat little waterside village with many lovely houses and gardens. These days, it’s a place for rich people to live. Most of the houses have “protected” status, and cannot be altered (much). They didn’t seem to mind a van of tourists wandering around – I guess they’re used to it. It is a great place to stroll around and maybe have a picnic by a canal or the “harbor” (really more of a large inlet these days) and nibble on cheese and schnapps.

Well, it didn’t take all day – but I didn’t have anything planned for the evening, other than random strolling.

As it happened, right by the pick up and drop off point for the tour, there are some good sights for the tourists – which I will get to next time.

This entry was posted in Uncategorized and tagged travel. Bookmark the permalink.

3 thoughts on “A Trip to Amsterdam – II”